3 Things You Should Never Cook in a Cast-Iron Skillet

currently we all know many advanture about cast iron cookware, such as Precision Heat Distribution; Healthy; Easy To Clean; Suitable for All Stoves. but we should warmly remind you there are 3 things not cook in cast iron skillet. 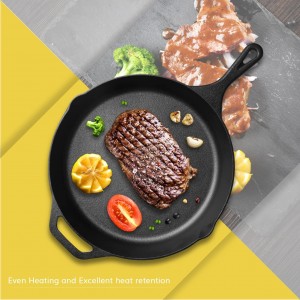 1,Acidic Foods (Unless You Make It Snappy)

You might have heard that cooking acidic foods in your cast-iron skillet is a big no-no. Turns out, that’s just not the case. We broke down that misconception and encourage you to read up if you’re not already in the know. However, acidic foods (like tomato sauce, wine-braised meats, etc.) enter the red zone when they spend too much time cooking in the skillet.

They also aren’t a good idea if your skillet isn’t well seasoned, but more on that later. So what happens if you accidentally let your acid-heavy sauce simmer too long? It could take on a metallic taste or start to break down the seasoning on your skillet. Either way, they’re scenarios any cook would be wise to avoid.

This one likely comes as no surprise, but fish, particularly thin or delicate varieties, is not well-suited for your cast iron. Even if you’re lucky enough to flip your fillets without incident, chances are the skin will not make it through the process. Stick to your nonstick fry pan or oven for the best results.

3,Skillet Brownies (If You Just Fried a Batch of Chicken Last Night)

Many a Southerner might argue that cast iron is the true do-it-all pan, going from main dish to dessert cooking without giving you a second thought—but maybe it’s worth taking a pause. Your cast iron will retain a bit of flavor from the foods cooked in it, which is all part of the seasoning process.

This doesn’t mean you should skip the desserts though. If you want to go from frying chicken to baking up a batch of skillet brownies without too much of a savory carry-over, just take extra care in cleaning between foods. If your skillet is well-seasoned, all it should need is a good scrub. Skip the soap unless you’re dealing with a real stuck-on problem, in which case a smidgen (that’s a scientific term) of mild soap should do the trick without damage. Just make sure to season it afterward.